There's a cool web page called "Eat the Weeds" which has detailed descriptions of all sorts of edible plants.  According to Green Deane (is that his real name?), Henbit is easy to identify, good to eat, no side effects, and just an all around good wild edible.  In the article, he describes himself collecting Chickweed, came across Henbit and decided to try it.  I'm sure they're all very good, but if you've ever been out collecting Chickweed or Henbit, you'll find that you will do lots of collecting before you get enough for a meal.  You're probably spending more energy doing the collecting than you get from the plant.  On the other hand, Henbit flowers are quite pretty and would add a unique touch to a salad, especially if you are having guests. 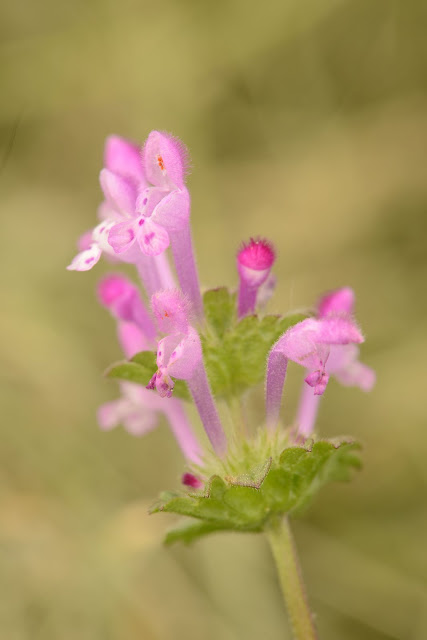 Posted by Paul McAfee at 3:12 AM No comments:

There's a big push lately to use native plants in your landscaping and gardening.  There are all sorts of benefits and not many downsides.  All you have to do is some research to learn which plants are native and how they would work in your yard.  In fact, there is a statewide organization called INPAWS (Indiana Native Plant and Wildflower Society) dedicated to getting the word out.  Be sure to check it out.

Tall Tickseed is on their list of native plants to use in the garden.  It is a very tall prairie plant that looks nice when it's planted in a group that has room to sway in the wind.

This plant is known as Blue Vervain to most people.  It is quite common and usually found near water.  It is rather distinctive because there are usually a number of flowering stalks sticking up higher than the plants around them.

Plants have way better names that birds.  Sometimes you have to dig deep to figure out how they got the name in the first place.  The names of a lot of plants evolved years ago and it's hard to know for sure where they came from.

So, who was Joe Pye?  And, why did they name a weed after him?

A deep and thorough research (Bing) reveals two competing theories.  One is that there was a guy named Joe Pye who was a medicine man in the 1700's who traveled around Massachusetts and used this plant to cure an outbreak of typhoid.  The other is that it is a derivative of the Indian word for typhoid - jopi.

The truth may be somewhere in the middle.

There are five species of Myosotis in Indiana, three of which are native and two non-native.  True Forget-me-not is not native.  Bummer.  It's a cute little plant that is occasionally found next to lakes and streams.

I don't know where it got it's name or why this particular Forget-me-not is "True".  Please comment if you know. 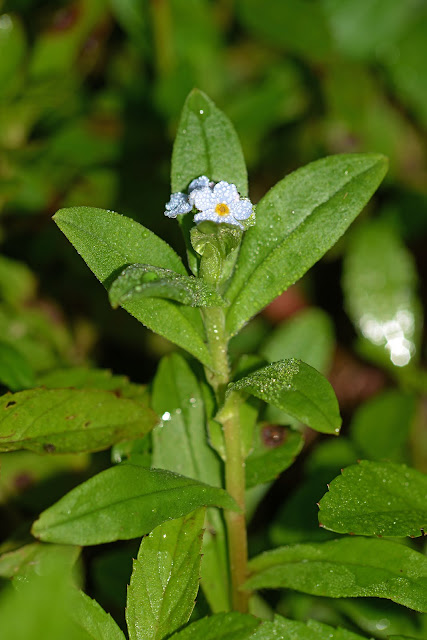 Posted by Paul McAfee at 4:27 AM No comments:

Indiana is full of exotic invasive plants.  537 of the 2630 species of plants found in Indiana are considered to be introduced and about 100 of those are considered invasive.

This isn't one of them.  It has the appearance of a weedy invasive, such as burdock, but it's a native species.

However, it's not native to Africa, where it has gotten established and is now considered to be an alien invasive.  So I guess it's just a matter of where you live and where the species started out to know if you should hate it or not.

Posted by Paul McAfee at 3:42 AM No comments:

This is a plant of the prairies, which occur mostly in western Indiana.  However, there have been lots of prairie restorations in other parts of the state and this plant can often be found where you might not expect it.  There used to be bits of prairie across northeast Indiana and into Ohio where the conditions were just right, so it's not totally out of character to have prairie restorations in these areas. 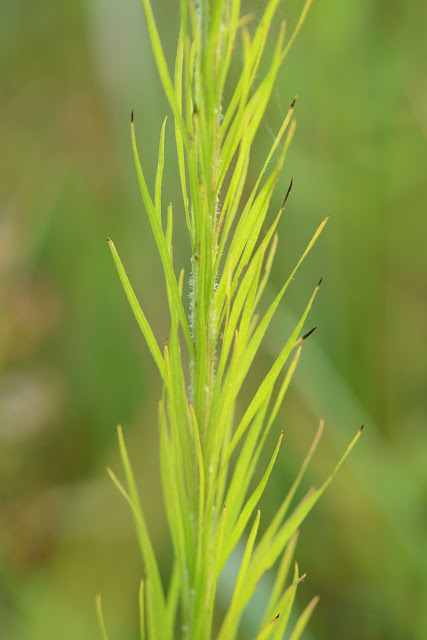 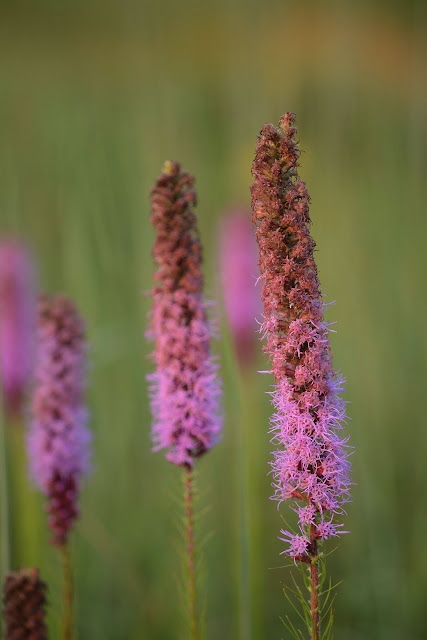 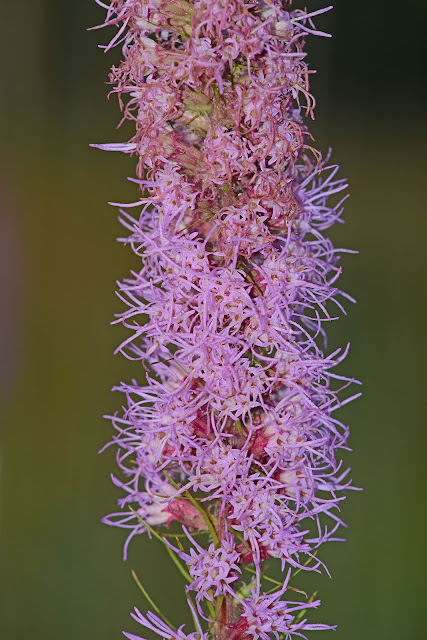 Posted by Paul McAfee at 3:05 AM No comments:

Pickerelweed is a pretty plant to come upon when canoeing along the edges of the lakes in northeast Indiana.  The flower heads are unmistakable, although the leaves are quite variable in shape and look a lot like Arrowhead (Sagittaria) leaves.  The seeds and young leaves are edible.

This plant grows in muddy areas along lake edges in small colonies.

Sometimes the name Frogfruit is used instead of Fogfruit.  An internet search for Frogfruit yields 125,000 results and Fogfruit gives 10,900 results.  So, via scientific analysis, Frogfruit is prefered 10:1 over Fogfruit.

So, why two names.  Well, the first name given was Fogfruit.  Fog is an old Scottish word for moss, referring to the growth habit of the plant.  The second name of "Frog fruit" first appeared in 1834 in "Botanical Teacher for North America".  This second name appears to be a typo, since it is also referred to as "Fog-fruit" in the same book.

The name "frog-fruit" is then used in another publication in 1852 - "Catalogue of Flowering Plants and Ferns: Observed in the Vicinity of Cincinnati".

And thus a new name was born.

Obviously people prefer the name of Frogfruit over Fogfruit, either for alliterative value or because the image of a frog is easier to remember than the old Scottish name for moss.  Call it what you will. 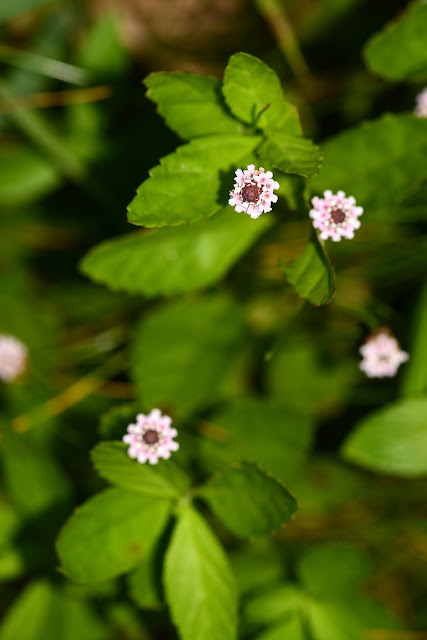 The Skunk Cabbage flower is one of the most peculiar looking and therefore easy-to-identify flowers in the plant kingdom.  It pops out of the ground very early in the spring.  They can be a bit hard to find among the leaf litter, but when you do find them there are usually a bunch of them.  They generally grow in colonies in wet areas in woodlands.

Skunk Cabbage also has a few other peculiarities.  One is that they smell bad (how about that).  Rather than smelling pretty like most plants, they smell like, hmmm, skunk.  Tear off a leaf sometime and give it a whiff.

Another thing is that they are thermogenic.  This simply means that they create heat, like mammals do.  Sometimes you can find the flowers late in the winter with the snow melted around them.

All in all, Skunk Cabbage is one of the more interesting plants on this planet.

Ahh, the Harbinger of Spring, one of the first flowers to show itself in a sunny woods in the springtime.  They're very small and blend in well with the leaf cover, so you have to really look for them.  But when you do, you know that the Hepatica, Cutleaf Toothwort, Bloodroot, etc. are not far behind!

Another name for this plant is Pepper and Salt, which of course refers to the small white petals and dark pistils and stamens.  Remember that it is "Pepper and Salt" rather than "Salt and Pepper".  If you look up "Salt and Pepper" in the index of a field guide, you won't find it.  It took me quite a while to figure that out.

Wild Cucumbers are striking plants.  These plants are found in woodlands, often near water.  They're viney things that drape across other plants and produce bunches of little cucumber looking fruits.  They're not edible like cucumbers, but they look cool.

Wild Cucumbers are unique in that they are the only member of the genus Echinocystis and, as near as I can find, there are no subspecies.  It's nice to find a plant that's easy to identify! 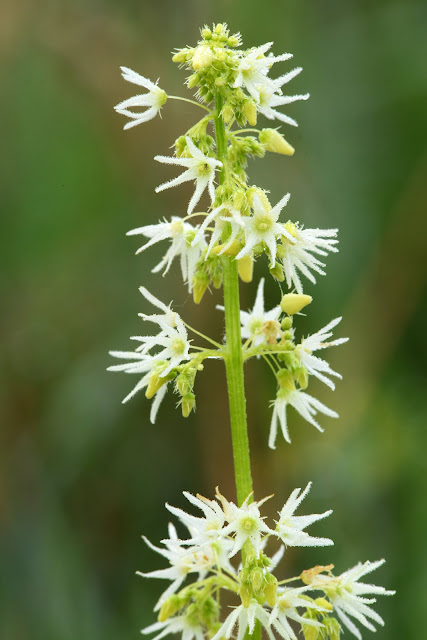 Posted by Paul McAfee at 3:13 AM No comments:

White Baneberry is more commonly known as Doll's Eyes, which is a great name for it since the fruits could easily be plucked and plopped into  some china doll's eye sockets.

The plant is 1-3 feet tall and really stands out in a nice woodland setting.  It is named Baneberry for a reason.  The berries, and for that matter the whole plant, is toxic.  It is in the buttercup family (Ranunculaceae), of which all species have a chemical called Ranunculin.  This is a fairly complicated chemical that can cause all sorts of problems if ingested, which happens more with farm animals that with people.  Don't let your kids play with the berries!

It is written that "The berries of Black Nightshade are edible to humans, if they are fully ripe and eaten in small quantities."  If not, I suppose you die.  Another book states "Personally, I consider the whole plant potentially deadly and leave it alone."  Euell Gibbons made pies from the berries.  So, what to do?!  Here's a very detailed explanation of the plant - Eat The Weeds.  If you're adventurous, at least wait until they turn black and ripe.

Posted by Paul McAfee at 1:00 AM No comments:

The Euphorb's have rather peculiar flowering structures that produce these rather peculiar seed capsules.  The flower is so unusual that botanists had to give it it's own name - cyathium.  I can't even describe it here, just follow the link if you're interested.  Those white things that look like petals are not. They're simply referred to as appendages.

In any event, they're cool looking plants.  Poinsettia's are in the Euphorbia genus.  Look closely and you'll see the same structure.