According to the University of Missouri Extension:


"Crownvetch is particularly adapted to road bank stabilization and erosion control. At the present time this seems to be one of the best uses for the plant."


On the other hand, according to the Missouri Department of Conservation Vegetation Management Manual:


"Crown vetch is a serious management threat to natural areas due to its seeding ability and rapid vegetative spreading by rhizomes.  This aggressive exotic is now widespread along roadsides, from where it may become a serious invader of Missouri's natural areas."

Butterweed is a plant that looks like an alien invasive species, but is in fact native to Indiana, mostly southern Indiana.  It looks invasive because if there is a wet spring when the farmers don't get out to plow early, Butterweed will fill the wet parts of the field with bright yellow flowers.  It's actually quite spectacular.

Common Boneset was a favorite medicinal plant of the American Indians, although not for setting bones.  It was used for aches and fevers.  The name "Boneset" was derived from the use of the plant for a severe type of flu called "Break Bone Fever".  The bones don't break because of this flu, but they feel like it.

The species name, perfoliatum, means "through the foliage" in Latin.  Quite a number of plants have this species name because it describe a unique feature where pairs of leaves are joined together around the stem giving the impression that the stem is going through the leaf.

Who doesn't like Ebony Spleenwort?  It's got a cool name, it's a neat little plant that grows in nice places, easy to identify and the sori are often present underneath the leaves.  The sori hold the spores and will ultimately release them to ride the wind and populate new places.

I tend to spot it in upland wooded areas, but it also likes rocky habitats, which are not common in northeast Indiana.

As far as the name, notice that the stem is a very dark "ebony" color.

Creeping Jenny has another, perhaps more common, name of Moneywort.  The name Moneywort comes from the leaves, which are the size and shape of coins.   The use of "wort" as a suffix in plant names comes from the Old English word, "wyrt", which just means plant.  Therefore Moneywort means "Money Plant".

As far as the name "Creeping Jenny", there is some speculation that it refers to the fact that it was once used as an herbal remedy for "chinne" cough (whooping cough).  The name would have originally been "Creeping Chinne", but morphed into "Creeping Jenny" when people no longer knew what "chinne" was.

Posted by Paul McAfee at 3:15 AM No comments:

You've probably never heard of Disc Mayweed, although there's a good chance you're familiar with its other name, Pineappleweed.  Pineappleweed is a good name for it, since it smells just like a pineapple when you crush it between your fingers.

You've probably seen this plant, but not have taken notice.  It's quite common in driveways and between the cracks of sidewalks.  It's rather short and unassuming.

The original range is the Pacific Northwest and northeast Asia.  It is possible that it was originally brought to North America by the Amerindians.

Another name for this plant is Wild Chamomile.  It is edible and can be made into a tea that helps with insomnia.

Posted by Paul McAfee at 4:26 PM No comments:

What can you say about pepperweed other than the seeds can be ground up and taste peppery.  I suppose the seeds of every plant in the world have been ground up at some time to see how they taste, and the pepperweed's seeds were the most like peppercorns (Piper nigrum - Piperaceae).

Pepperweed has the shape of a bottlebrush.  To distinguish it from other bottlebrush-looking plants, look closely at the pods and leaves.  The leaves clasp the stem.

Dame's Rocket is one of those beautiful plants that is alien and somewhat invasive.  By invasive, I mean that it is found in great, colorful clumps in ditches along roadsides, an area that is pretty much only populated by alien invasives.  So, it apparently out-competes other invasives.

Posted by Paul McAfee at 3:23 AM No comments:

Garden Yellowrocket is a cool name for a rather weedy plant.  Another name is Bittercress, presumably because the leaves are edible, yet bitter.

This plant is an alien from Eurasia.  It's quite common and prefers disturbed areas and "waste places", which are quite common.

Posted by Paul McAfee at 4:23 AM No comments:

There are 86 species of Sisyrinchium listed in the USDA Plants database.  Obviously the plant taxonomists really enjoyed working with this plant.

Of the 86 species, only 4 are found in Indiana and only 2 in northeast Indiana.  The other species is White Blue-eyed Grass which, lo and behold, has white flowers.

Posted by Paul McAfee at 3:19 AM No comments:

Bird's-foot Trefoil is one of those plants that is planted on purpose, but then escapes and becomes a bit of a nuisance.  It is planted in cattle pastures to add a nice legume to the pasture mix.  It grows better in poor soils than alfalfa and doesn't cause bloat, whatever that is.

It's a pretty flower, especially up close.  It blooms from spring to fall.  A lot of people like it and in northeast Indiana it seems to be confined to poorer soil, i.e. roadsides.  I don't see many native species along roadsides, so it isn't really competing with our natives, just other foreigners. 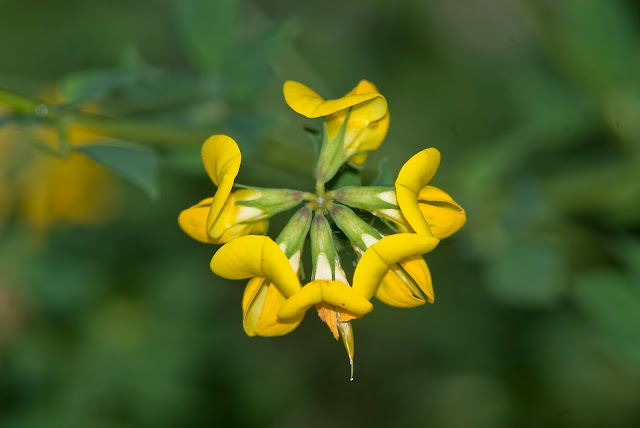 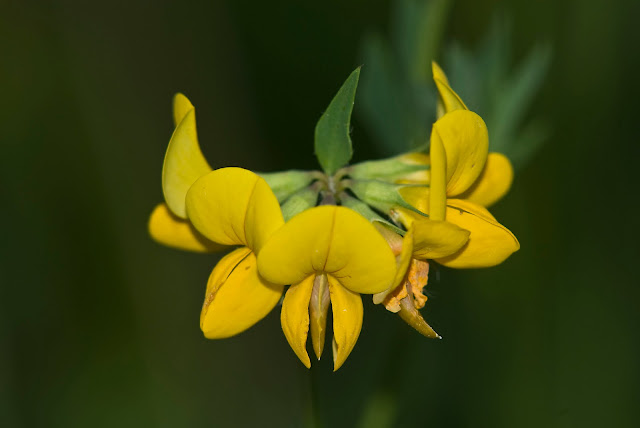 Sessileleaf Ticktrefoil is a prairie plant.  It's been described as somewhat rare.  The only place I've seen it is in prairie restorations where it has be planted and is doing well.  Of course, I don't get to pristine prairies much ... there aren't many in Indiana.

The peculiar thing about Ticktrefoils is their pod, which has it's own word - loment.  A loment is a kind of pod that is pinched between each seed so that they can break apart easily.  The pod has little velcro-like hairs that help it stick to an animals fur. As the animal wanders around, the seed sections break apart and fall to the ground, thus dispersing the seeds.