Monkeyflower got its name from the fact that it resembles the face of a monkey.  I don't know ... it doesn't look any more like a monkey than anything else to me.  I'm guessing that whoever named it just liked monkeys.  Who doesn't?

An interesting thing I learned while perusing the web is that the stems and leaves tend to accumulate whatever salts are in the soil and were used by Native Americans to flavor their venison.  I'll have to give it a try sometime ... I hope you can believe everything you read on the Internet.

Common Motherwort is easy to identify.  It's not a native species to Indiana, and like a lot of non-natives, it doesn't have many predators, and stays fresh looking for a long time.  It's a mint that always grows in bunches.  It has perfect looking leaves with a nice symmetry.  The flowers, and then the seed pods, grow in the axils of the leaves.

This is a cool little flower.  It has been suggested that the name comes from the look of the plant and the fact that it grows in what used to be Miami Indian territory.  With the fringed petals, a large grouping of this plant might look like mist coming off the ground.

It is very pretty up close.  The petals have more of a fringe than any other plant I'm aware of.  We found this plant growing near the Eel River in Indiana during a canoe trip.  It was seen in several places, not along the river but higher up on the banks in wooded areas.  I believe they need rich wooded areas without a lot of shade.

Musk Mallow is pretty much a garden plant that easily escapes and grows wild near the original garden.  I've never seen it far from a garden so it must not be very successful in the wilds of Indiana.  It is not native to Indiana, and naturally there are several species of Mallow that are all similar looking, but as far as I know this one is the most common. 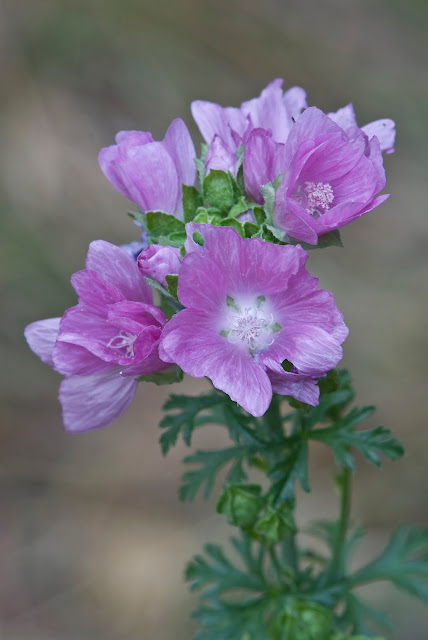 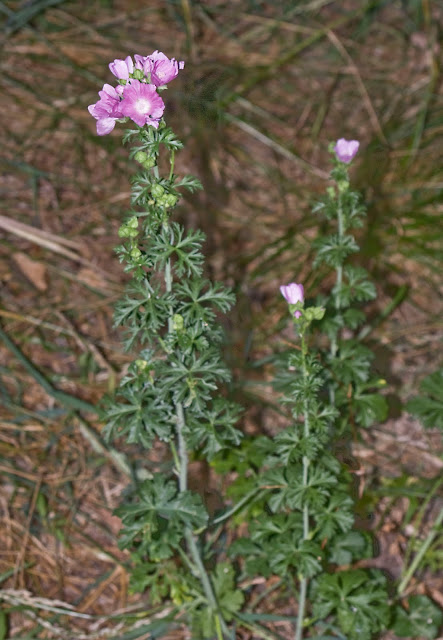 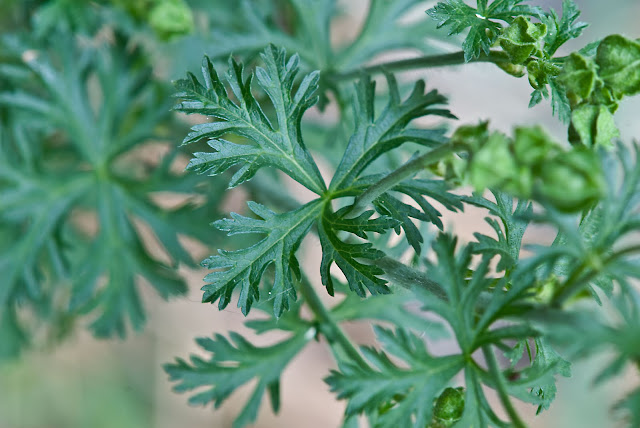 Oxeye Daisy is one of those plants that is loved and hated.  Gardeners love it because it can add a lot of brightness to a garden.  Farmers and invasive plant haters hate it because it is not native to the U.S. and can be a bit invasive.

Also, students of botany hate it because there's another plant named just Oxeye (Heliopsis helianthoides), or Smooth Oxeye, which is closely related to the sunflowers (Helianthus) and is therefore sometimes called False Sunflower.  Why make it simple!

It's a very noticeable plant that's easy to identify in Indiana because there are no similar looking plants, at least that I'm aware of.  The flowers last a long time and are rather attractive. 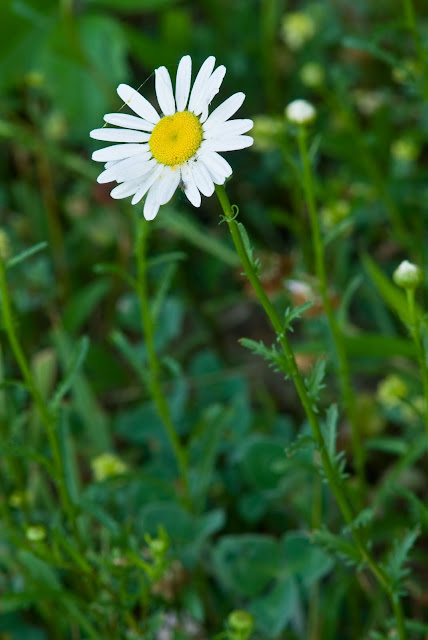 Jewelweed has both cleistogamous and chasmogamous flowers.  Seriously, that's how botanists talk!  I think their goal is to make sure that no one knows what they're saying when they're talking dirty!!

Translation; cleistogamous = self-pollinating and chasmogamous means cross-pollination.  Anyone who's ever seen a Jewelweed is familiar with the pretty orange flowers, but if you look closer you'll see some small green closed flowers.  The small green flowers are self-pollinated and produce seeds that are clones of the parent.  While this doesn't promote adaptation, it takes less energy and is more reliable than cross-pollination.  So, this works better in degraded habitats or when the plant is stressed.  It's been noticed that when the plants are grazed, most of the regrowth only has the green flowers.

Jewelweed has more reproductive strategies than a wolf at a singles bar.  The lower lips of the flower act as guides for hummingbird beaks and as a platform for bees and other insects.  The tubular flower guides them in to the nectar and the stigmas, which hold the pollen.  The spur at the end produces copious amounts of nectar.  Hummingbirds, bees and other insects can pollinate this plant.  Most go in through the opening, but some have figured out a way to just chew a hole at the bottom and leisurely sip the nectar.

The plant can be quite tall and delicate so that it sways easily in the breeze.  One theory about this is that when a hummingbird sticks its beak in, the plant easily moves and therefore puts more pollen on the beak of the hummingbird.  Someone even did an experiment by tying supports on the plants and comparing the amount of pollen on the beaks of hummingbirds using the free, swaying plants versus the supported plants.  They found significantly more pollen from the swaying plants.

Jewelweed has gone out of its way to have a variety of pollination strategies, which is probably why I see it everywhere. 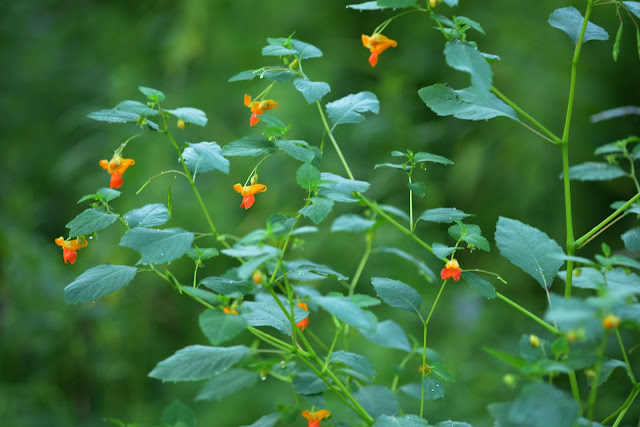 Pale Touch-me-not is the lesser known cousin of Jewelweed.  The foliage is quite similar looking, although Pale Touch-me-not's are generally bigger.  The main difference is the flower color, which is yellow in this case versus orange for Jewelweed.

It's called Touch-me-not because the seed pod will burst open when disturbed, shooting its seed out all over the place.  So, if you touch a seed pod that is just ready, it will burst on you.  It's not spectacular and is no reason to not touch it.  In fact it's fun to try it, and to have kids try it. Prickly Lettuce is a tough plant.  As you can see from the picture above, it can grow quite large through a crack in the cement.  It's an impressive plant, although most folks would call it a weed.

It is closely related to garden lettuce (Lactuca saliva).  At first you might wonder why, but if you ever grew lettuce and let it bolt, it looks a lot like the wild lettuces.  You wouldn't want to eat this one though.  It's said to be bitter tasting and contains a bitter sap called Lettuce Opium, scientifically knows as lactucarium.  It's not actually an opium, but was studied for some time as a milder alternative to opium.  They never got the formulation right, but you can still buy it to be used for whatever reason you like.  It was used by the ancient Egyptians, Greek, and Romans as a painkiller, sedative, and aphrodisiac.  However, modern testing seems to show that it doesn't really have much of an effect at all in those regards.  Some people don't believe the modern testing and still use it anyway.  Choice is yours.

There are nine species of Lactuca in Indiana.  The easiest way to distinguish this one is that it has yellow flowers and a line of soft prickles on the underside of the leaf along the main vein. 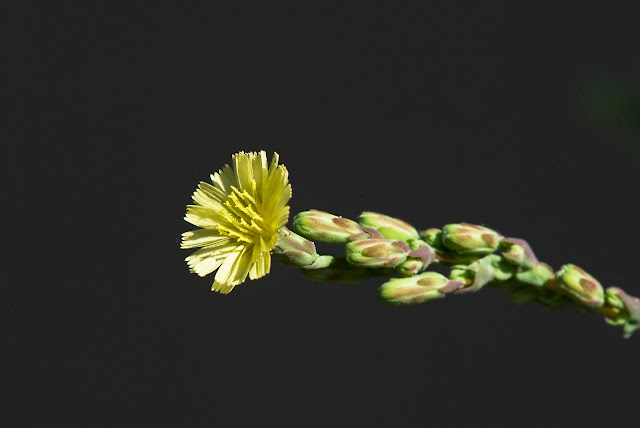 How do you tell the difference between Purple Meadow-rue and Waxyleaf Meadow-rue?  You crush the leaves and sniff them!  As noted botanist Scott Namestnick says:

" If you crush the leaves of T. revolutum (Waxyleaf Meadow-rue) and smell them, you'll know that's what you have.  They have a distinctive, disgusting, body odor-like smell.  I nearly gag when I smell it, and I'm getting nauseous even thinking about it."

That sure is a lot easier than looking for glandular hairs underneath the leaf.  What is a glandular hair anyway?!  I suppose it's a hair that looks like a gland.

There are three species of Wild Petunia's in Indiana.  This one might more commonly be known as Smooth Wild Petunia, but that's a boring name, so the folks at the Plants Database are going with Limestone Wild Petunia.

For those of you interested in native plants, this petunia is native, as opposed to the Petunia petunia, so it might be a good choice for your garden.  Does anybody have any experience planting this? 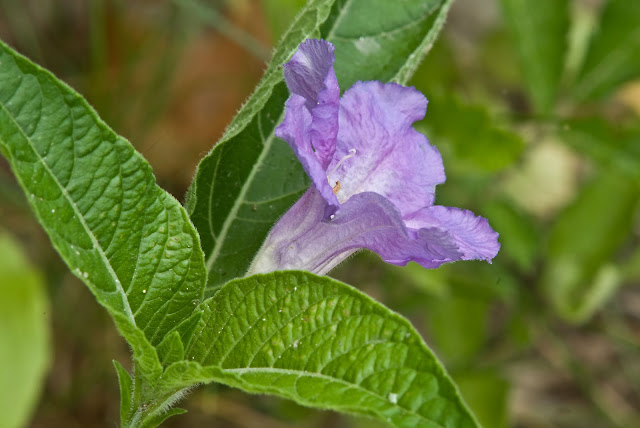 This Loosestrife is a native perennial that blooms late in the summer in moister spots.  It's quite striking and the flowers last for a long time ... a very pleasant plant to come upon while batting away the mosquitoes and deer flies.

Notice that the flower petals are round, but have a tip at the end.

Wild Garlic, also known as Field Garlic, is a non-native species of Allium that looks somewhat like Meadow Garlic (Allium canadense).  The main difference is the flowers.

This is an edible plant, similar to cultivated garlic (Allium sativum), but stronger in taste.  It can be invasive in pastures and farm fields.  If the dairy cows eat them, the milk can taste garlicky.  If they get harvested along with wheat, then the resulting flower can taste garlicky.  I guess the Italians wouldn't mind this, but Midwesterners frown upon it and try to get rid of the plant. 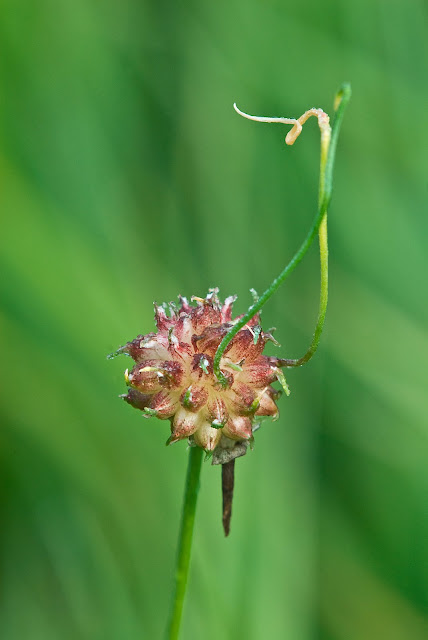 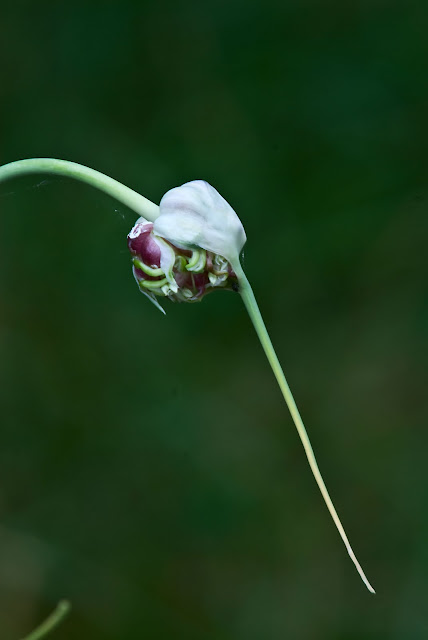 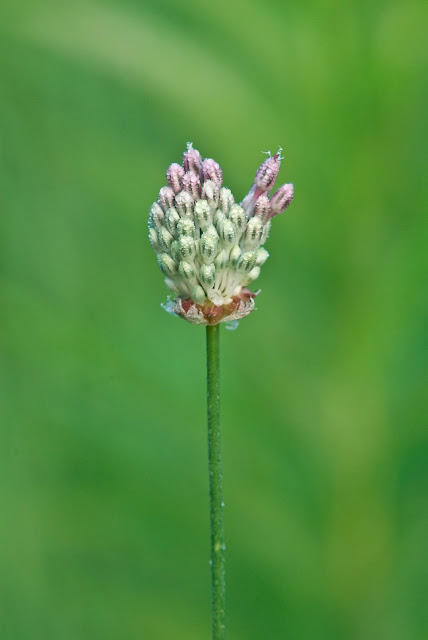 Narrowleaf Wild Leek is closely related to Wild Leek, Allium tricoccum, which is also known as Ramp.  Some "authorities" consider them to be the same species, but not all.  There are a number of described differences, but the main one is that the Narrowleaf version has narrower leaves. :-)

This peculiar plant grows a bunch of leaves in the spring, but then they're gone by the time the plant flowers. 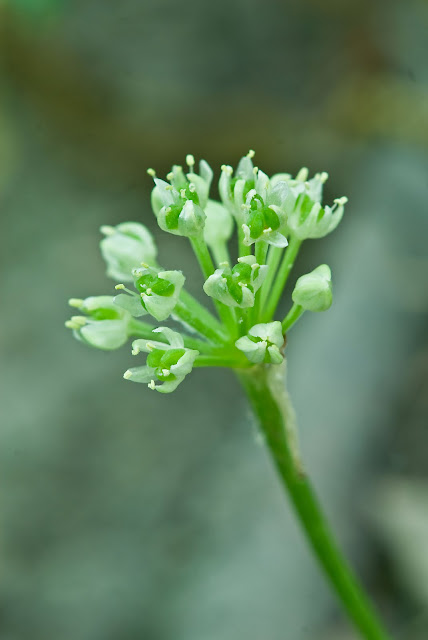 The Alliums can be a bit confusing because various species have been given various names.  This one is alternately call Meadow Garlic, Wild Garlic and Wild Onion.  Another species, Allium vineale, is called Wild Garlic or Field Garlic.  And yet another species, Allium cernuum, is called Nodding Onion or Nodding Wild Onion.  So, depending on your field guide, you might have an onion or a garlic which is wild or not.  This is a case where the scientific name is better than the common name.

Another identification difficulty is that the Allium plants have been widely cultivated, which can lead to various looking plants and flowers. 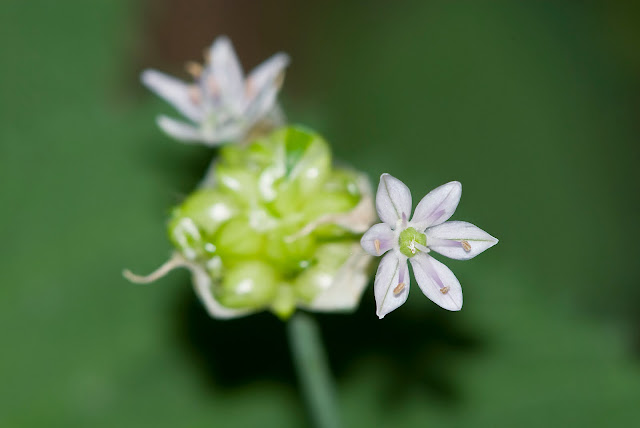 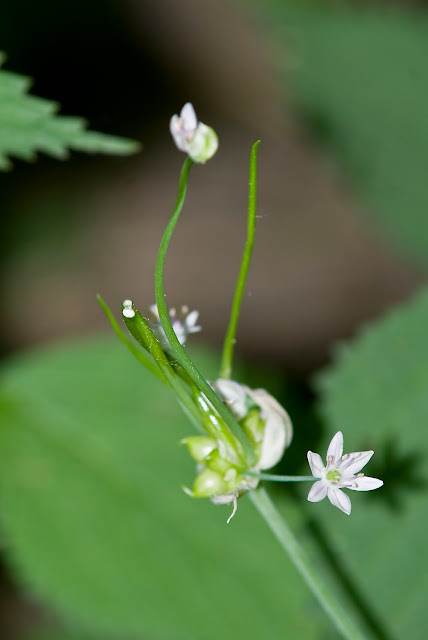